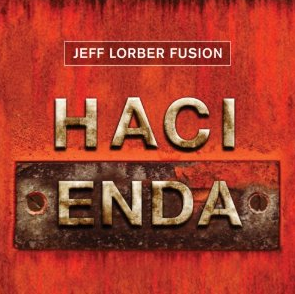 The JEFF LORBER FUSION are all set to release their latest album. The 11 track ‘Hacienda’ hits the sales racks on August 26th and for the album, master keyboardist Lorber joins up again with his new, regular Fusion partners – saxman Eric Marienthal and bassist Jimmy Haslip. Other featured players include Larry Koonse, Paul Jackson Jr, Vinnie Colaiuta, Lenny Castro and Jean-Luc Ponty who joins the Fusion team on a cover of his old paymaster, Frank Zappa’s ‘King Kong.’

That venerable rock chestnut is the only cover on ‘Hacienda’ – the theme of which was inspired by the legendary Manchester music club of the same name. Lorber honours the club’s place in music legend and throughout this new album there are definite hints at the classic house music sound that was pioneered in the Whitworth Street venue.

Lorber says, “‘Hacienda’ is a bit more focused than some of our previous projects. The writing is more original, the playing is better, the overall vibe is more exciting… and we had a blast bringing it all together.”

JEFF LORBER FUSION’S ‘HACIENDA’ is released on Heads Up on August 26th.