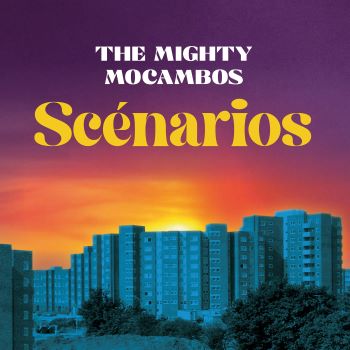 THE MIGHTY MOCAMBOS are Germany’s hardest working soul and funk outfit. We’ve featured their music many time before an they always peddle hard driving, old school, brassy funk – recorded in analogue and delivering an organic, energized sound. If you’ve not yet caught up with them, then maybe the time’s right to investigate their new album, ‘Scénarios’, released this Friday 28th October.

The album is a live set… though not in the strictest sense. The 11 tracks were recorded in various venues like the famous Hamburg record shop, Groove City, at a breakdance event in Potsdam and in a mobile studio  which the band took on the road. All the performances were captured on 8-track tape and amongst the highlights are covers of ‘Let The Music Play’ and the Axel F theme from ‘Beverly Hills Cop’.

Amongst the original tunes are the ultra-funky ‘Something’s Missing’ (with an anonymous female vocal) and ‘St Pauli Second Line’ which as the title implies draws its brassy inspiration from the loose funk of New Orleans. Much more meditative are ‘Four Two Three’ and ‘Silent Heroes’. Both are acoustic recordings caught at a charity concert and show a different  side to the Mocambos. The set finishes with an acoustic version of ‘Where Do We Go From Here?’ (originally recorded with Lee Fields).  They all add variety  to the album  which is released this Friday 28th October via Mocambo Records / Golden Rules