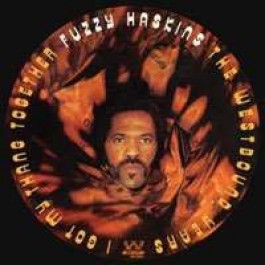 West Virginia’s FUZZY HASKINS (Clarence Eugene Haskins) was a key member of George Clinton’s Parliament/Funkadelic circus. He joined the Parliaments just as ‘I Wanna Testify’ was breaking out and was there as legal disputes saw Clinton create Funkadelic. Without going into the gory details, the relationship between the various members of Funkadelic was always volatile and Haskins and Clinton had a peculiarly on/off argumentative relationship, especially where creativity was involved. Haskins eventually quit the fold and recorded his own album for Westbound. By 1976, though, he was back but arguments over money and creative control saw Fuzzy walk again. By this time, we’re told, he was also finding religion, making it hard for him to square the band’s lyrics with his new found faith. However, he did record a second solo set, like the first, for the Westbound imprint.

By the early 80s’, though, he finally quit the business to focus on his religion and preaching it. In 1990, though, he briefly teamed up with Westbound boss, Armen Boladian to record a gospel album and he even got back together with original Parliaments Calvin Simon, Grady Thomas and Ray Davies in Original P.

To celebrate Fuzzy’s work Ace/Westbound have just released a fine, funky 16 tracker that highlights the best of Mr Haskins’ solo work. Put together by Funkadelic expert Marcel Visser, the set offers some of his best known cuts like ‘Cookie Jar’, ‘The Fuz And Da Boog’ (much sampled that one) and ‘Which Way Do I Do Disco’ – his dig at George Clinton – alongside a generous selection of off the wall space funk collectables

FUZZY HASKINS; I GOT MY THANG TOGETHER is out now