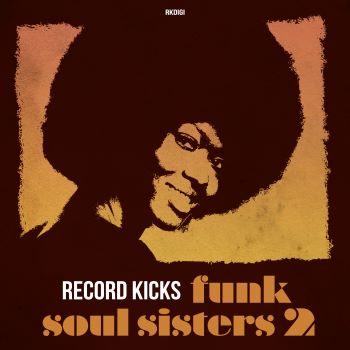 Milan-based label RECORD KICKS has just launched the second volume in what looks now to be an on-going series, ‘FUNK SOUL SISTERS’.

The title sort of says it all. Here we have ten cuts from the female side of the label’s roster – each one offering its own take on the funk genre. Most famous name on the set list is probably Martha High who, of course, enjoyed a 30 year stint with a certain James Brown who knew a thing or two about funk. Ms High’s offering here is the tough and gritty, ‘Mama’s Got A Bag Of Her Own’ – the title and sound pay homage to her erstwhile boss!

The other featured artists include Hannah Williams, The Tibbs, Martha Ren, Baby Charles and Gizelle Smith whose inclusion is a bit of an oddity – an instrumental, ‘June’. Good tune but no Gizelle!

From a soul perspective, the album highlight is the lovely ‘Frustrated’ from Tanika Charles. This one first appeared on the Canadian singer’s lovely  April ‘Papillon De Nuit’ album and it’s more of a contemporary soul dancer than a funk blow out! Sweet harmonics and superficially gentle, Tanika digs deep vocally to sound like the title,  especially on the hook laden chorus. Definitely worth investigating!

FUNK SOUL SISTERS volume 2 is out now via RECORD KICKS