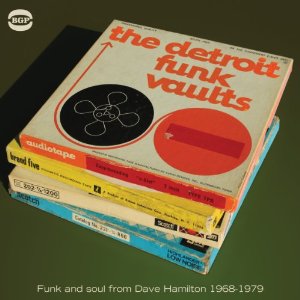 HAMILTON’S music career began in the 1940s and by the late 50s and early 60s he was part of the Motown session band. In 1964 he left the Gordy fold to set up a whole succession of labels like Temple, Topper, TCB and New Day. ‘The Detroit Funk Vaults’ boasts 22 rare and rarefied tracks drawn from those labels and others (like Rojac) to whom he licensed material. The LP’s title indicates the general mood – dirty, down home urban funk like ‘You Fool, You Fool’ from PROPHET AND THE DISCIPLES and ‘Love Bandit’ by O C TOLBERT.

Other flavours are represented too. ‘Clap Your Hands’ from THE TOKAYS and ‘You Don’t Miss Your Water’ by CHICO and BUDDY are great examples of harmonic soul and will please Northern die-hards too, while HAMILTON’S own ‘Ghetto Stride’ is a jaunty, jazzy affair. Many of the tracks are either seeing the light of day for the first time or making their digital debut and the album’s available now.