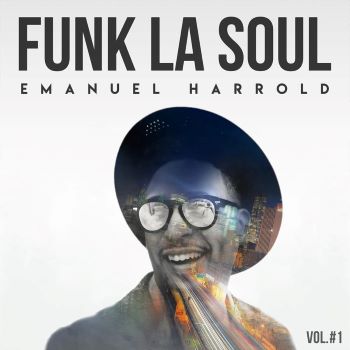 Right now Emanuel is focusing on building a solo career and today (19th August) he releases an intriguing 4 track EP, ‘Funk La Soul’ with the lead track being a mesmerising ‘Brighter Day’. The cut features  a vocal from Crystal ‘Crissy’ Ransom and fellow Gregory Porter collaborator Tivon Pennicott on flute alongside Emanuel’s groove heavy drumming. Between them and the other players they craft an improvisational sound that melds R&B, jazz, soul, gospel, and funk. And that’s the EP’s sonic template.

The other tracks are the  gentle, building  ‘Best Part’ which features Carlos ‘Scooter’ Brown on alto sax, a rhythmic cover of the Allen Toussaint/Pointer Sisters’ ‘Yes We Can’ (Brian Owens on vocal)  and a lazy jazz groove, ‘Free’ which features more of Scooter Brown’s sax alongside some biting guitar from Andrew Bailie.

Harrold sums up his music thus: When you think of jazz, funk & soul music, Gregory Porter, Keyon Harrold, Diana Ross, Robert Glasper, Marvin Gaye, James Brown, Rev Al Green, Freddie Hubbard, Curtis Mayfield are big examples of this sound and mood. This music represents organic sounds of the freedom through expression. It’s not only jazz which bases its foundation on negro spirituals, blues, and improvisation, but also the roots are in the intellect of the expression of culture seeping in from the neighbourhoods, people, sights, political views, sounds and down to food they ate. The fabric of one’s culture. Note all the life experiences were expressed through their individual created musical works. Funk La Soul for me is all the above energy reciprocating and also recreating this musical feeling. This is a freedom through my interpretation of jazz, funk, gospel, and soul music that I desire to share.”

The drummer is already working on a full album. In the meantime enjoy ‘Funk La Soul’ which is out now via London label and analogue specialists Gearbox Records. Proper grown up music this!