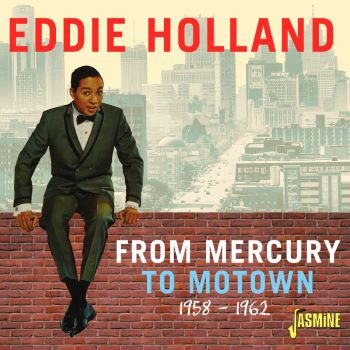 Vintage reissue label JASMINE RECORDS have just released two collections that are sure to interest serious soul collectors. One features EDDIE HOLLAND; the other BILLY BLAND.

Known now primarily as a writer/producer (one third of the mighty Motown triumvirate Holland-Dozier-Holland), Eddie Holland began as a hopeful vocalist and this new Jasmine collection looks at that aspect of his career. ‘From Mercury To Motown, 1958-1962’ offers a generous 46 tracks across 2 CDs to show that with the breaks (and a bit more  confidence) Eddie could have been a contender.

Eddie’s  career is inexorably tied up with Berry Gordy’s early ambitions. Gordy began as a songwriter and he used the young Eddie to sing his early demos because he sounded remarkably like Jackie Wilson, then the big star. Gordy saw the potential in Holland and signed him to his fledgling production company which, back then, leased its recordings to other labels. So, Eddie Holland’s  early tracks were licensed out to labels like Mercury, Kudo and United Artists before Gordy eventually decided to sort his own “proper” label. All those early Holland tracks are collected here. The most important is 1961’s ‘Jamie’ which became a hit on the new Motown imprint. It was even released in the UK on Fontana – if you have an original copy, you’re sitting on a fortune!

After the success of ‘Jamie’ Eddie continued to record and enjoyed more hits with ‘Leaving Here’,  ‘Just Ain’t Enough Love’ and  ‘Candy To Me’. But, despite his cracking voice, it seems Eddie struggled as a singer. He suffered nervous problems when performing live and even had difficulties in the studio., By the mid 60s he turned his back on a solo singing career and the rest…

Billy Bland is the archetypal “one hit wonder”, known for his 1960 smash, ‘Let The Little Girl Dance’. But there was a lot more to Bland than that  – as this Jasmine retrospective shows. ‘Let The Little Girl Dance. Old Town And Imperial Singles 1954-1962’ offers 64 tracks of which ‘Let The Little Girl Dance’ is clearly the jewel in the crown but also of interest is ‘Toy Bell ’which Bland recorded with vocal group The Bees. In 1972 Chuck Berry was to reimagine it as ‘My Ding A Ling’! The music on this collection (including that hit) is very much of its time…. reminiscent of early Drifters and people like Jackie Wilson and Clyde McPhatter. Billy just seemed to lack that little extra stroke of luck to make him a star. He did though enjoy quite a career, retiring in the 80s to run a soul food restaurant in Harlem where he kept  a juke box stacked with his old records!