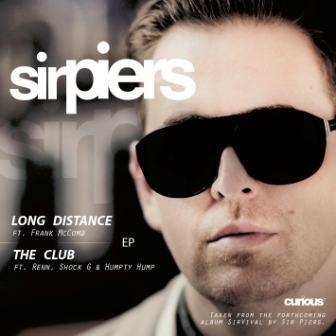 Twelve months ago the UK soul world fell in love with a jaunty little single,  ‘American In Chelsea’ from SIR PIERS. His lordship was/is the alter ego of Piers Penfold – producer, songwriter and musician who also runs his own lovely, little label… Curious Records. The ironic ‘American In Chelsea’ was fronted by the lovely Monique Bingham and we were told the tune was from our man’s “upcoming” album ‘SirVival’.

As far as we’re aware that album is still “upcoming” but we do know that Sir P is releasing an EP – ‘The Long Distance EP’ on 11th August. At the moment one track has been “leaked” from the EP – the  sweet n lovely title cut,  ‘Long Distance’ for which Sir Piers has secured the talents of a certain Frank McComb to sort the vocals. In its original incarnation ‘Long Distance’ is a tight modern soul groove and Big Frank’s in fine fettle though some might say in places he sounds a little croaky! That gruffness, though, adds a world weary quality to proceedings.

‘Long Distance’ also comes in a “Curious Remode” that clocks in at 8 minute plus and all the credible soul stations are giving both mixes plenty of air play.

The EP’s other cut is ‘The Club’ – featuring rap input from Shock G/Humpty Hump but don’t let that put you off. The rhyming is totally organic to a wonderful, modern soul groove with wicked vocals, an unbelievable bass line and tight beats. Like ‘Long Distance’, the tune also comes in a “Curious Remode” that skirts into soulful house territory. Impossible to say which of the tracks takes  the accolades…. all are classy modern soul but each one offering something a little different.