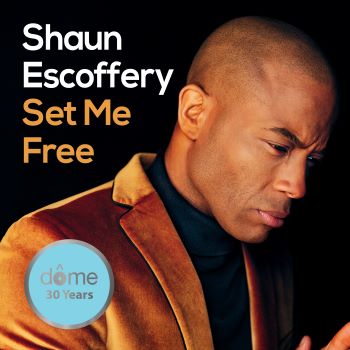 Been a while since we’ve heard new music from the ever-reliable SHAUN ESCOFFERY – a couple of years, maybe? Well, he’s a busy man. He’s an in-demand session singer and musical theatre star and top of the list when producers need someone really special to work with on TV and radio – who can forget Shaun’s spine-tingling rendition of ‘A House Is Not A Home” for Burt Bacharach at that legendary  all-star concert in London’s Royal Festival Hall?

The good news, though, is that our Shaun is preparing new music and is set to release a new single next Friday, 17th June. It’s a soulful mid-tempo, ‘Set Me Free’ which has been produced by the garlanded Gil Cang with whom Shaun worked on ‘Natures’ Call’ and ‘Perfect Love Affair’. Shaun’s vocal on the track is as powerful as ever, proving why he’s so in demand.

‘Set Me Free’ is released via Dome, Friday 17th June and we believe that it will be a feature track on an upcoming second compilation album celebrating Dome’s 30th anniversary.