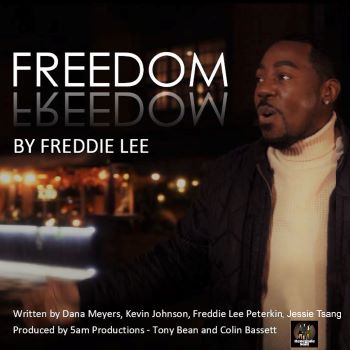 FREDDIE LEE (Peterkin) hails from Florida and we last heard from him back in 2010 when he released a lovely album, ‘Beyond Comprehension’. The LP was actually recorded in Birmingham (UK, not Alabama)  and with production  by Tony Bean and Colin Bassett, the album was packed with passion, commitment and old school soul – hardly surprising when you glance at Freddie’s bio. We learned that our man  had  paid his dues and though the CD wasn’t a gospel album per se, it’s clear where our man was coming from. Yep, his singing background is in the church – and that’s gospel flavour is evident again on his latest single, a beguiling ‘Freedom’.

The sweet and lovely tune began as a melodic and instrumental idea created by Dana Meyers (hit songwriter for Shalamar, The Whispers, Glen Jones) and the late Kevin Johnson of the group Slave. Freddie added the lyrics and along with Jessie Tsang sorted the arrangement and production to create a subtle soul stepper with a jazzy undertow delivered via Mr L’s convincing vocal .

Freddie Lee’s ‘Freedom’ is out now via Renegade Soul Records. It’s a great comeback after a long wait but our patience has been rewarded. Recommended!