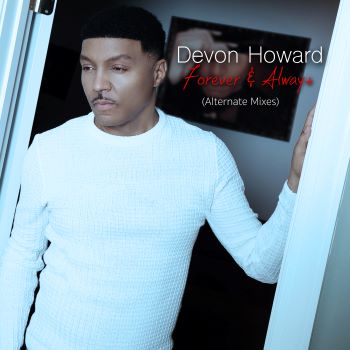 ‘Forever & Always’ (Always Steppers Mix) is the title of a new single from Baltimore soul man DEVON HOWARD. Mr. H is a new name to us but on the strength of this tune he clearly has a bright soul future.

Hardly surprising, since he tells us that he grew up listening to his father’s soul music collection. Young Devon developed a soft spot for The Manhattans, The Stylistics, and Motown. As a teen he was in boy band Me 2 U and appeared on Soul Train and at the famed Apollo! A decent soul apprenticeship, for sure!

In 2015 he released the solo single ‘Other Side of the Bed’ which enjoyed some Stateside success but his 2021 single ‘Forever & Always’ out preformed that one in the US. Now reissued in the “Always Steppers Mix”  it’s winning even more support. Easy to hear why, it’s an easy-on-the-ear, head-nodding, foot-tapping steppers affair with a lovely smooth soulful vocal from young Devon.

We believe there’s an album on the way – ‘Morning Son’ slated to be released on May 15th, 2022.  But in the meantime, ‘Forever & Always’ (Always Steppers Mix) comes recommended!