FOR WHATEVER IT’S WORTH…. 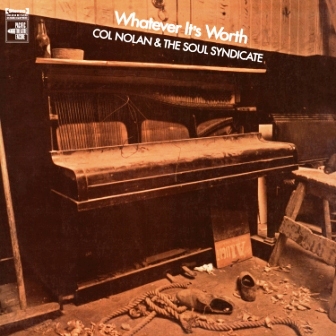 Aussie soul man LANCE FERGUSON is a busy boy! I’ve lost track of the projects the Bamboos’ front man throws himself into! His latest baby is a new reissue label… Pacific Theatre Encore which debuts with a 1968 Australian soul jazz classic album from COL NOLAN & THE SOUL SYNDICATE. Through the swinging 60s Nolan led the in-house band at one of the most famous night spots in the Land of Oz… The Whiskey A Go Go, on William St, Kings Cross, Sydney. That band numbered Nolan on Hammond organ, drummer / percussionist John Sangster, Col Loughnan on sax and flute, John Allan on bass and “Diamond” Jimmy Doyle on guitar. This “THE SOUL SYNDICATE” drew its inspiration from people like Jimmy Smith, Jimmy McGriff and Brother Jack McDuff and their late 60s/early 70s albums are highly-sought after vinyl artefacts for DJs, record diggers and collectors alike. Their rarest LP is 1968’s ‘Whatever It’s Worth’ and that’s the album that marks the debut release for Pacific Theatre Encore.

‘Whatever It’s Worth’ is a ten tracker and it’s been meticulously restored from the audio, taken from a vinyl copy of the album, which was then remastered by Steve Smith at Studio 301. Like all great soul/jazz albums of the 60s the repertoire is a loving mix of covers and cool originals. Amongst the covers is a version of ‘Got My Mojo Workin” which, of course, was also recorded by Jimmy Smith. This new ‘Mojo’, unlike Smith’s, is sans vocals. The biggest vocal on the album is ‘By The Time I Get To Phoenix’ (an epic 8 minutes plus and watch for the wild, psychedelic ending). Listen up too to a great ‘Sunny’… the Bobby Hebb tune was a soul/jazz perennial.

Sadly, reedsman Col Loughnan is the sole surviving player on the album, and he gives invaluable insights to the reissue’s liner notes, and it’s the first time he’s had a chance to hear the album since misplacing his only copy decades ago! He says: “With the fusion of Jazz, Rock, R&B and Soul music becoming a trend in Australia in the late 60’s” he recalls, “Sydney’s Kings Cross was alive with numerous music venues, featuring great bands playing seven nights a week into the early hours of the morning. The Whiskey A Go Go was one of the busiest clubs of that time and was a residency for Col Nolan’s group The Soul Syndicate. It was also a great opportunity for the band to break in new material night after night, much of it was recorded on the album ‘Whatever It’s Worth’.”

Though ‘Whatever It’s Worth’ is Australian through and through it holds its own against any Hammond-led set on say Prestige or Blue Note and for those who collect singles, two originals, ‘Shades Of McSoul” and the album’s title, track are available on a limited 7″ single.