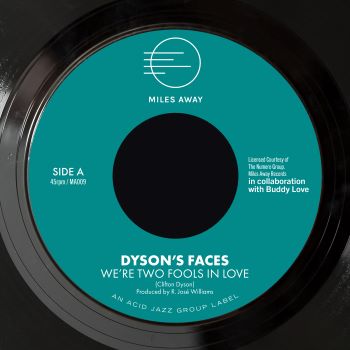 DYSON’S FACES were a 70s soul vocal “group” from  Durham, North Carolina. Clifton Dyson (younger brother of Ronnie Dyson) was the main man. His music career began fronting a group called the Differences and under that name, he released just one single – ‘Five Minutes’ on  Mon’ca Records.

Clifton then broke away and began working on his own with arranger Eddie Drennon and producer Jose Williams. Though Clifton was essenatillay perfoming solo, the trio created a group identity for his music – and this mythical Dyson’s Faces eventually released two albums (confusingly, the second LP contained some of the first one’s tracks!) . It will be no surprise to learn that over the years both LPs have  become collectors’ items.

Fast forward to the present and Acid Jazz subsidiary label Miles Away have licensed two tracks from those albums and are all set to release ‘em on a tasty 7”. The A side is a busy, brisk, bustling dancer – ‘We’re Two Fools In Love’. It’s a classic 70s up-tempo sound – a touch of the Spinners and Philly about it and the Northern fraternity will find plenty to enjoy in its grooves too! The B side is a beautiful, soulful ballad, ‘Don’t Worry About The Jones’ . It features a magnificent Teddy Pendergrass flavoured  vocal from Clifton Dyson supported by sweet harmonies – a lovely piece of group soul!