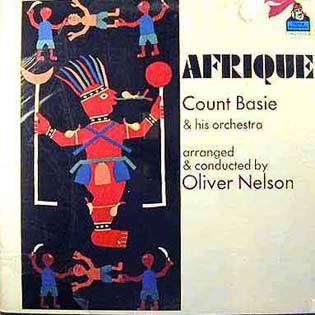 Ace’s BGP imprint has just released three more albums in their reissue programme of the Flying Dutchman label’s back catalogue. The Bob Thiele-founded label was one the 70s most prestigious and innovative jazz companies – amply illustrated by these three new reissues.

First up is ‘Afrique’ from COUNT BASIE and his ORCHESTRA. Label boss, Thiele had been a long-time fan of the iconic jazz man and when the opportunity arose to record him and his big band he jumped at the opportunity. Moreover he gave Basie a free hand allowing him to record whatever in his own special way. The result was a blistering 8 tracker that was “very 1971”, yet with its roots in the classic Basie band tradition. Most of the tunes are originals – provided by people like Albert Ayler and Gabor Szabo but of particular interest is a great version of ‘Hobo Flats’. Basie’s arranger Oliver Nelson had written the tune in 1963 for Jimmy Smith but here he resurrects it with a languid panache that’s irresistible.

Second new reissue is GATO BARBIERI’S ‘Third World’. A complex four tracker, the 1970 LP was the Argentine sax man’s Flying Dutchman debut and sees him working towards his especial fusion of jazz with South American tradition. The third release is another label debut – LONNIE LISTON SMITH’S ‘Astral Travelling’. Bob Thiele had known Smith from his work with Pharaoh Sanders and after a stint with Miles Davis, Thiele was determined to sign him. The first fruit was this 6 tracker – which pointed the way to Smith’s later “cosmic jazz”. For this album, the keyboardist eschewed the use of synths and the set has an acoustic feel to it … but it’s nevertheless mellow, spacey and yes – spiritual. For this reissue, BGP had added four bonus cuts…. alternative takes of four of the LP’s key cuts.