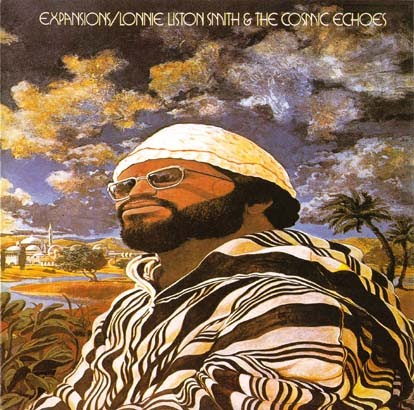 BOB THIELE’S Flying Dutchman label was one of the most important and influential jazz labels of the 70s. UK-based reissue specialists, Ace Records have recently been licensing Flying Dutchman music for re-release. So far Ace, though their BGP imprint, have issued an acclaimed collection on GIL SCOTT-HERON and retrospectives on LEON THOMAS and LONNIE LISTON SMITH.

May sees BGP begin releasing a series of classic, stand alone Flying Dutchman LPs and they begin with the iconic ‘Expansions’ from LONNIE LISTON SMITH. Every proper soul and jazz fan knows the title tune but there are only a few who own the parent album…. now ‘s the chance to rectify that. The 7 track LP (originally released in 1975) leads off with ‘Expansions’ but also includes ‘Desert Nights’ , ‘Voodoo Woman’ (on both of which SMITH shows off his improvisational skills), ‘Summer Days’, ‘My Love (two Latin-infected items) and a version of HORACE SILVER’S ‘Peace’ (featuring a vocal from DONALD SMITH)

There’s a cover of ‘Peace’ on the second new BGP/Flying Dutchman release – LEON THOMAS’ ‘Spirits Known And Unknown’. This is the LP which launched the singer’s signature song, ‘The Creator Has A Master Plan’ but worth checking too are ‘Malcolm’s Gone’ (with PHARAOH SAUNDERS on sax) and the beautiful ‘Let The Rain Fall On Me’.

The third album in this new series is ‘Cesar 830’ by CESAR ASCARRUNZ – a great and rare collection of salsa and Latin Jazz. One of the cuts is ‘See Saw Affair’ – a long-time two step club favourite.

Vinyl collectors also need to know that BGP have also issued two 7″ singles from the Flying Dutchman catalogue – GIL SCOTT-HERON’S ‘The Revolution Will Not Be Televised/Home Is Where The Hatred Is’ and LISTON SMITH’S ‘Expansions’/’A Chance For Peace’….while in the months to come we can look forward to full CD albums on ORNETTE COLEMAN, GATO BARBIERI and others.