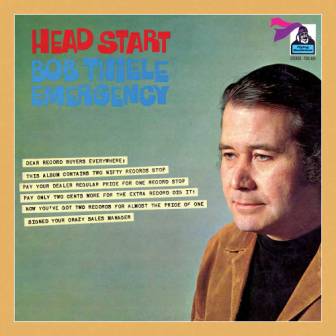 First up there’s the BOB THIELE EMERGENCY’S ‘Headstart’. The album is being reissued for the first time and on release back in 1969, jazz commentators considered it the producer’s masterpiece. The LP was Thiele’s take on the history of jazz but it’s peppered with wry asides on the state of the world as it was then. It’s also an unashamed homage to John Coltrane. To help him deliver Thiele drafted in guests Ornette Coleman, Charlie Haden and Elvin Jones.

Coleman takes star billing on the second BGP reissue with ORNETTE COLEMAN: Friends and Neighbours… Live At Prince Street. From 1970, this long player is a rare glimpse of the 70s New York loft jazz scene. Recorded in Coleman’s own club, the 6 tracker is being made available for the first time in 40 years, allowing jazz collectors access to a missing piece of the free jazz scene era jigsaw.

ESTHER MARROW’S ‘Newport News, Virginia’ is the third new BGP release. Again, this is a first time CD issue and will satisfy the demand for the set that’s been building after discerning DJs have boosted its reputation by regularly playing some of the key soul/gospel tracks from their old vinyl copies. Listen up to ‘Chain Of Fools’ and ‘Money Honey’.