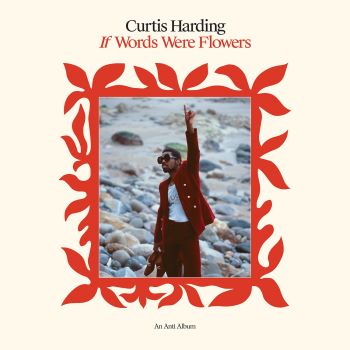 CURTIS HARDING is an Atlanta-based singer who describes his sound as ”psychedelic soul”. See  if that’s an apposite description by checking out his upcoming album, ‘If Words Were Flowers’ which wins release on November 5th…. Bonfire Night!

The 11 tracker (Harding’s 3rd) is an adventurous collection that offers all kinds of  flavours. Raw and gritty, rocky with a soul undertow, in places it has echoes of Prince and people like Lenny Kravitz. Get an early taste of the sound by investigating Harding’s video for the track ‘Can’t Hide It’. The film features actors Omar Dorsey (‘Queen Sugar’) and Anthony Mackie (‘’Captain America’, ‘The Hurt Locker’) who introduces Curtis’s performance of the song on a fictional 70’s TV show –  a lovely pastiche!

When speaking about the inspiration for that song and indeed the whole album Curtis explains  that growing up his mother used to tell him, “Give me my flowers while I’m still here.” It was a phrase that stuck with him through the years, a reminder to show his love and appreciation for the people he cared about before it was too late. He says: “That’s what this album is It’s me giving my flowers to the world, to anybody who needs to hear what these songs have to say right now.”