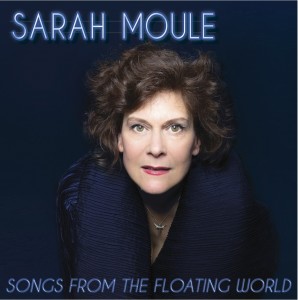 Jazz singer SARAH MOULE releases her latest album on September 15th. The 16 tracker, issued on Red Ram Records, is called ‘Songs From The Floating World’ – “The Floating World” being the name given to the red light districts in Japan between the 1600s and the 1800s. There, it seems, all kinds of people rubbed shoulders – artists, musicians, geishas, actors, courtesans and wrestlers .

Sarah likens that world to her own formative years – a period when America’s beat poets mingled in the London club scene. A key figure on that scene was lyricist Fran Landesman – a peer of people like Lenny Bruce and Jack Kerouac. She was a long-time collaborator with Ms Moule’s husband, Simon Wallace and seven of their songs take pride of place on the new album . Other tunes include Cole Porter’s ‘I’ve Got You Under My Skin’ and Willie Dixon’s ‘My Babe’.

The album is released on September 15th and will be launched at Soho’s Pizza Express Club on 16th, after which Sarah embarks on a 21 date tour.