FLASH IN THE PAN! 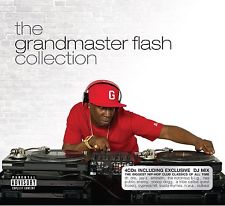 Following the huge success of two no.1, Platinum and Gold certified “Collection” albums, Sony Music hand the curator duties for the third set in the series to hip-hop legend GRANDMASTER FLASH.

Joseph Sadler – “Grandmaster Flash” – began DJ-ing in the South Bronx in the late 70s and with The Furious Five he soon became a legend in the burgeoning hip-hop community and his 1981 recording ‘The Adventures Of Grandmaster Flash And The Wheels Of Steel’ remains a music milestone.

So when Sony music decided to compile a classic hip-hop collection (to follow their Trevor Nelson soul set and Pete Tong’s dance retrospective) who better to front it all than the Grandmaster?

The 4CD ‘Grandmaster Flash Collection’ hits the sales racks on August 18th and it’s stuffed with the very best of hip-hop. It features seminal tunes from pioneers like The Sugarhill Gang, Run DMC, Big Daddy Kane and LL Cool J; it includes classics from the genre’s biggest names – Dr Dre, Jay Z and Eminem amongst them; and it also includes some of the more recent names like Lupe Fiasco and L’il Wayne. And it goes without saying that the Grandmaster’s own ‘The Message’ kicks things off in fine style! What’s more, the fourth CD in the set offers an exclusive Grandmaster Flash DJ mix which incorporates all the best hip-hop tunes from the last 35 years.