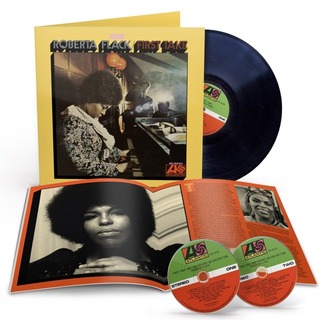 Released in 1969, Roberta Flack‘s debut album, ‘First Take,’ took three long years to build up a head of steam that would take it to the summit of the US pop and R&B charts in 1972. The catalyst that helped propel it up the charts was the album’s single, ‘The First Time Ever I Saw Your Face,’ which became a hit after it was memorably featured in Clint Eastwood’s Play Misty For Me movie.

To mark ‘First Take’s’ 50th anniversary, US specialist label Run Out Groove in association with Rhino has announced that they will be reissuing the album in remastered form as part of an expanded 2-CD/1-LP edition that includes a rare B-side and twelve previously unreleased demo recordings. A limited-edition of 3,000 copies, and exclusive to the SoulMusic website, the set is packaged in a 12 x 12 hardcover book format. It is bolstered with a liner note essay from David Nathan that features an introduction from Les McCann, who brought Roberta to the attention of Atlantic Records.

The set retails at $49.98 and is released on July 24, 2020. It is available to pre-order now from https://store.soulmusic.com/first-take-50th-anniversary-deluxe-edition-1.html