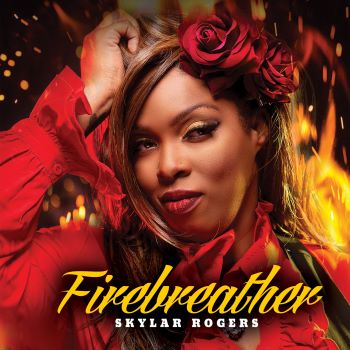 SKYLAR ROGERS is a Chicago blues singer. Raised in some of Chicago’s toughest neighbourhoods, she learned at an early age that music brought people together. Her philosophy (borne out of personal hardship and some joy too) is that there is a song for every emotion. She says: “Music survives the worst and celebrates the best.” And that’s the message that permeates her latest album – the ten tracker that is ‘Firebreather’.

American blues critics are comparing Ms Rogers’s sound as a cross between Tina Turner and Etta James and it’s hard to argue with that! Skylar cites Koko Taylor and BB King as big influences too and there are shades of both about ‘Firebreather’ … the tough, feisty vocal attack of Taylor and the biting guitar licks of King dominate the album. (The album’s lead guitarists are Stephen J Hill and Marty Gibson).

Hear Skylar at her most typical on the LP’s title cut. The song’s message is that hell hath no fury like a woman scorned and the musical backdrop and vocal blitzkrieg match the sentiments. There are more tender moments though. ‘Failure’ is a slow burner with a heart-breaking tone while ‘Thankful’ sees the singer at her most soulful.

SKYLAR ROGERS: Firebreather. Out now on via CD Baby.