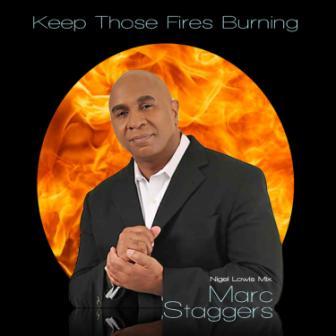 After a long career being known as the premier Luther Vandross sound-alike, MARC STAGGERS has, over the last couple of years, finally won recognition in his own right. A slew of quality singles has won him the respect of the whole soul community and his most recent efforts ‘Let Me Be The One’ and ‘Bring It Home To Me’ were big soul chart hits, dance floor fillers and mainstays on radio playlists!

Now, Marc’s new release is all set to consolidate his position and indeed it’s already getting multiple plays on the very best soul stations…. little wonder, it’s a gem!

Jewel in question is a subtle mid-tempo groove, ‘Keep Those Fires Burning’ which was written by Mr S in tandem with current top mix man Nigel Lowis. Marc’s voice is as warm and intense as ever and Nigel’s clever production allows it to shine soulfully through… a great augury for Marc’s upcoming album ‘Timeless’.