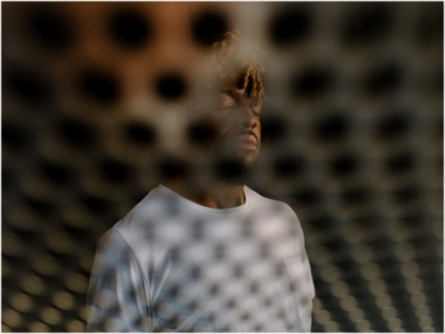 A talented singer, pianist and composer who was nominated for a Jazz FM Award in 2017,  Ashley Henry makes unclassifiable music that blurs the boundaries between the usually clearly defined worlds of soul, jazz, pop, classical music and hip-hop. Building on the eclectic musical foundations established by his acclaimed 2019 major label debut album ‘Beautiful Vinyl Hunter,’ the 30-year-old South London-born musician has recorded a new six-track EP called ‘My Voice.’

The EP’s jazz-infused title track, characterised by lush keyboard chords and a twitchy groove, has already been released as the first single from the set and on February 14th, Henry is set to issue a second single taken from his new studio venture. It’s called ‘Melanin’ and finds Henry’s soulful vocals framed by a backdrop co-created by flautist  James Massiah, guitarist Ed Riches,  bassist Abel Addington, and drummer Myele Manzanza.

Explaining the message behind his new song,  Henry says: “Melanin is finding someone or something that’s a refuge from taking that wrong or easy path. Listening to it feels like a safe space. I wrote it as a certainty of belonging that’s accessible no matter where we are. Melanin is my celebration of beauty, love and black futurity. The track pays homage to women always trying to provide a safe space for their families and through their culture, and to the safe spaces I’ve found in my life.”

‘Melanin’ is available to download and stream from February 14th 2022. His EP ‘My Voice’ follows on May 13th.