FIND IT ALL THE TREY J WAY… 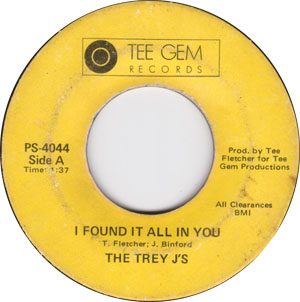 The TREY J’S were a 70s male vocal pairing operating out of Atlanta. Their unusual name comes from the initial letters of the duo’s first names – JAMES Binford and JOSEPH Smith. “Trey” was/is an Americanization of the French word for three – “tres”; yep, you’re right… I did say there were only two members of the group…. the third “J” in the group’s name was their manager JOHNNY Glover.

All very strange as is their brief career trajectory. In the 70s the Trey J’s were resident artists at Atlanta’s infamous Pink Pussy Cat Club where they came to the attention of label owner Thomas “Tee” Fletcher. He signed them to his Tee Gem label and they released just one single – the rough, bustling ‘I Found It All In You’ coupled with the slower, more tuneful ‘We Got A Thing (Going On)’. The single bombed but the boys continued to perform in and around Atlanta but it all ended when Binford was given life imprisonment. Smith had no option but to quit and he eventually became a school teacher, passing away in 2012.

Over the last year or so the UK soul club crowd have “discovered” ‘I Found It All In You’ and it’s been getting plenty of scene spins. Resourceful UK reissue label, Soul Junction has just officially licensed the single and released it as a vinyl 45. Easy to hear why ‘I Found It All In You’ is proving popular. It’s rough and rustic and its enthusiasm might recall the best of Sam And Dave. The B-side, the aforementioned ‘We Got A Thing (Going On)’, is a little more polished and boasts some sweet soul harmonies alongside the wild wailing.