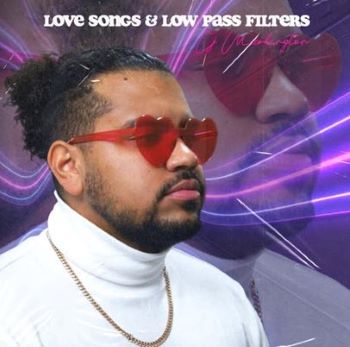 CJ WASHINGTON, a new name to us,  is a Sacramento-based soul singer-songwriter and guitarist. His way into a musical career was typically modern – the TV talent show. In 2009 CJ (then called Christopher John) featured on MTV’s ‘P Diddy Starmaker’ show; then in 2017 he impressed mentors like John Legend on ‘The Voice season 17’.

His debut outing was the ‘Soulacoutisc’ EP, followed by a second EP, ‘Spend The Night’ – both helping build a fan base which is sure to increase via his third release, a 5 track EP ‘LOVE SONGS & LOW PASS FILTERS’.

Those ‘Love Songs’ are all originals and the sound , though rooted in classic soul, is thoroughly contemporary US R&B. Production and co-writing credits are down to Vidal Garcia and friend Devin Wright and amongst the highlights is the crisp, finger-clicking opener ‘Upside Down’. ‘Raindrops’ and ‘Him’ are slower jams and overall the sound might remind you of Joe – hardly surprising – Mr Thomas is one of CJ’s heroes and influences.