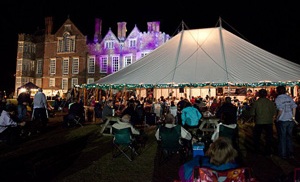 When it comes to Summer music festivals the Burton Agnes Jazz and Blues Festival maybe a little more low key than some but it certainly offers one of the most intriguing and interesting line-ups and extra attractions. Running from June 27-29th the acts at the Yorkshire event include Chantel McGregor, British Blues Award’s guitarist of the year AND female vocalist of the year 2013; the legendary jump, jive, swing, rhythm and blues of King Biscuit and the Pleasure Boys; sultry New-Orleans-Bourbon-bar vocals and boogie piano of Tipitina; and gospel-tinged favourites Polly and the Billets Doux. More variety? Well there’s also saxophonist Alan Barnes, teaming up with Horace Silver experts The Give a Little Love Orchestra for ‘Watching the Detectives’: a music set that intriguingly celebrates Sherlock Holmes and Columbo!

Other performers include Brothers Groove, Octopus, Rob Law, Farino, Rebecca Robyns and Dan Edwards, Lucy Marshall, The Alligators, Matador, The Kingstown Blues Band, Jason King and the Lemon Monkeys. To top it all, Burton Agnes Hall owner, Simon Cunliffe-Lister will be playing out the festival on Sunday with Ben Beattie’s After Midnight Band.

Moreover, the festival is proud to be an official fringe event of Le Tour de France’s visit to Yorkshire. Burton Agnes will salute the arrival of the Tour de France’s ‘Le Grand Depart’ with their very own ‘Le Mini Depart’. Also taking place at the Burton Agnes Jazz And Blues Festival, will be time-trialled clown bike races on ‘Le Mini Course’; a celebration of French cuisine on the food lawn; and the hothouse gypsy-jazz music of France’s most famous jazz guitarist, Django Reinhardt, performed on stage by Djangologie.

Full weekend tickets are priced at £60 Adult and £58 Concessions: OAPs, Burton Agnes Hall members and students, and this includes children aged 12-15 (children under 12 are free with an adult). Families need only buy one concessionary ticket to cover all their children aged 12-15. Day tickets and camping vouchers are also available and currently discounted too.