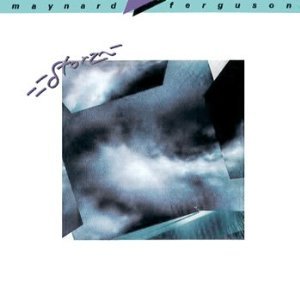 First up is his 1982 album ‘Storm’ which featured Ferguson and band tackling material as diverse as Duke Ellington’s ‘Take The A Train’ and the theme to ‘Sesame Street’. The 8 tracker even featured a rare Ferguson vocal, his take on the standard ‘As Time Goes By’ while originals like ‘Go With The Flo’ have been fan favourites since the set was originally released.

Recorded two years later, ‘Live From San Francisco’ is the second new Omnivore reissue. The album captures the Ferguson band in full flow at San Francisco’s Great American Music Hall and the set features classic originals like ‘Fireshaker’ and ‘Coconut Champagne’ alongside standards like ‘On The Sunnyside Of The Street’. The LP’s undoubted focus though is the 13 minute tribute to jazz greats Dizzy Gillespie, Charlie Parker and Thelonius Mink – ‘Bebop Buffet’.

Canadian-born, Ferguson, of course, was known as one of jazz’s most innovative players. Able to hit higher notes than any of his contemporaries, he made his name in the bands of Stand Kenton and Jimmy Dorsey before branching out on an acclaimed solo career that lasted till his death in 2006.