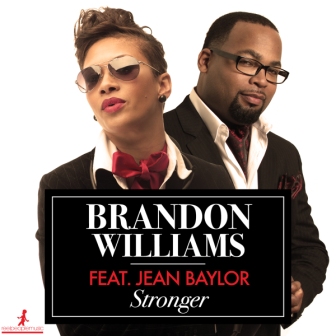 Ever wondered what happened to the great Zhané duo? Well after the girls dissolved their partnership Renée Neufville hosted an early live internet series called ’88 Soul’. She later contributed to albums and videos by the likes of India.Arie, Will Downing, Heather Headley, Leela James and Aaliyah. She then became involved in with trumpeter Roy Hargrove and figured prominently on his 2006 release ‘Distractions’ playing keyboards and contributing lead vocals.

In the meantime Jean Norris married Yellowjackets drummer, Marcus Baylor and went on to release the solo LP ‘Testimony: My Life’ and a Christmas album called ‘Light Up the World’. The good news is that Jean is now firmly back on the soul radar. She’s just cut a fine song called ‘Stronger’ which has won release on Reel People Music.

The recording is collaboration with Brandon Williams and hubby Marcus gets in on the act too- playing drums. The trio wrote the heartfelt ballad which deals honesty with the ups and downs of relationships and vocally Jean is in superb form –think prime time Toni Braxton mixed with peak time Whitney. It’s quite lovely.

The tune has also been given a make-over by the UK mixer Paris Cesvette. The tweak sits nicely in soulful house country and though it’s pacey the pleading vocal remains upfront… a potential floor filler.

Don’t yet know if there’s an album from the duo in the pipeline but I have been told that there’s a solo LP on the way from hotly-tipped Brandon Williams. Amongst that set’s collaborators are Robert Glasper and Frank McComb. Find out more @ www.reelpeoplemusic.co.uk