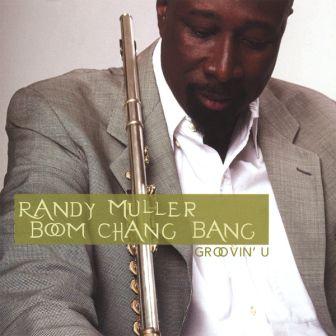 Most soul folk have a soft spot for RANDY MULLER – the brains behind bands like Brass Construction, Skyy, BT Express, and First Circle. For reasons never best explained Mr M dropped off the radar for while, but a couple of years back he re-emerged mentoring a band called Brooklyn Soul Biscuits, then all kinds of production work.

The last we heard from Randy was back in January when his BROOKLYN GROOVE MACHINE won lots of plays with their ‘Disco Holiday’. Now he’s back fronting RANDY MULLER BOOM CHANG BANG and they have a very tasty double A sided single out right now. First up is the bright, breezy, infectious ‘Joy In Da Rain’ … a touch of disco, a smidge of smooth jazz and a great soul vocal… great stuff. And the bonus? Well you get the incomparable Angela Johnson on vocals.

The “other” side is ‘Groovin’ U’ which we’re told comes from Muller’s previous album (?). We don’t much about that but this “new” track is “re-recorded live”. It’s a disco romp – mainly instrumental with some Herbie Mann style 70s style flute running through the track. Both tunes are from Randy’s “upcoming” album.