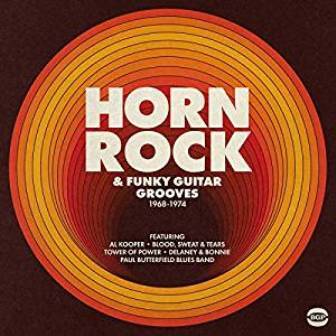 ‘Horn Rock And Funky Guitar Grooves’ is the newest compilation from Ace/BGP. The thesis behind the 17 tracker is that in or around 1968 many US rock bands turned their back on progression and psychedelia and attempted to go back to the soul and jazz that they’d grown up hearing.

The term “horn rock”, the BGP people tell us, refers to rock bands that boasted horns sections – like, say Blood Sweat and Tears and Chicago Transit Authority (latterly just Chicago). Indeed Blood Sweat and Tears are one of the featured bands. Their offering is 1973’s ‘Roller Coaster’ while band founder Al Kooper (he only lasted with them for one album with them!) delivers another of the compilation’s key cuts… the Hayes/Porter song ‘Toe Hold’.

Other featured bands include Lighthouse, Chase, The Sons, The Flock, Black Magic and The Electric Flag – most new, I’d guess, to soul collectors, but what they deliver does, in places, have a soulful quality.

Horn Rock And Funky Guitar Grooves is out now on BGP