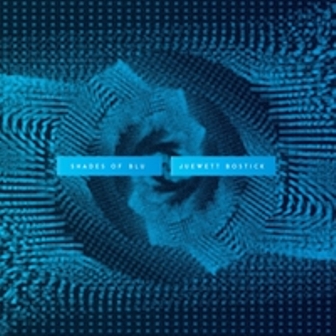 ‘Shades of Blu’ is the latest project from guitarist / technologist, JUEWETT BOSTICK, (pronounced Ju wet, and affectionately called ‘JU’ by family and close friends). Bostick, for whatever reason, records infrequently. I think ‘Shades of Blu’ is his first album since 2003’s ‘It’s Not That Easy’ and the man’s new sound is very different – a quirky mix of traditional music skills and technological savvy. He says: “‘Shades of Blu’ is the evolution of converging forces. The times we’re in, the technology at our disposal and a life long association with musicians, singers and artists. It’s an innovative new direction in Jazz!”

For sure the long player is different. The set is a 17 tracker but there are only (I think) 9 separate tunes with the other cuts being alternative/extended/re-imagined versions of the originals whilst on some cuts, it appears the players and the vocalists are in melodic conversation. The set list a mix of Bostick originals and tunes by Hank Mobley, Lee Morgan, Thelonious Monk and Jimi Hendrix. That should give you the measure of the album’s variety and intrigue.

‘Shades of Blu’ is out now and if you’re an avid sleeve notes reader you might have noticed the name of Juewett Bostick on albums by people like Norman Connors, Grover Washington, Jr. Bobby Brown, The Temptations and Nancy Wilson and that soul/jazz experience shines through on ‘Shades of Blu’.