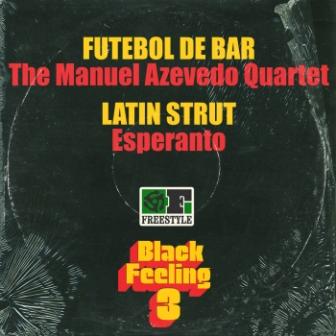 Connoisseurs of rhythmic dance compilations will know all about Freestyle Records’ BLACK FEELING series. Series compilers (mainly Lance Ferguson from the Bamboos) scour the globe to bring a wealth of new discoveries culled from their musical explorations. In many instances the recordings were unearthed from unreleased master tapes, private-press vinyl recordings and little-known local releases.

That’s what the PR hype says. In reality the music on BLACK FEELING is all new … recorded by Lance and his team who are offering their versions of long lost gems, using all kinds of aliases for the old “recording artists.”

Whatever, BLACK FEELING Volume 3 is about  to hit the sales racks and it’s been heralded by two big upfront cuts…. ‘Futebol Bu Bar’ by “The Manuel Azevedo Quartet” and a version of Deodato’s ‘Latin Strut’ from “Esperanto”. Both are big and powerful and guaranteed to fill floors at festivals and festivities anywhere.