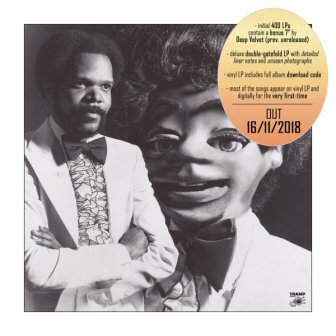 Over the years the German label TRAMP has issued plenty of mighty rare soul, jazz and funk. The set up is known for its carefully curated compilation series – like ‘Movements’ and ‘Praise Poems’ and now the guys have launched a brand new series – ‘Can You Feel It?’ which is all set to explore and offer ultra rare and obscure disco and modern soul grooves.

Next week (16th November, to be precise) Tramp will release the first volume in the series…. ‘Can You Feel It? Modern Soul, Disco & Boogie 1976-86’. The album boasts 18 tracks and, unusually for Tramp who specialise in the real obscure, there are a few names here that soul collectors will recognize right away… like the Tams. Their offering is the sweet mid-tempo groove ‘This Precious Moment’ – stuffed with all the veteran group’s signature sounds including that special “cracked” lead voice. Then there’s Ron Henderson’s gritty ‘Boogie Man’ – a cut that has been popular in Europe for a while now. A name that most soul folk won’t recognize is The Deep South Dance Band- however, they’ll know the lead voice – a certain Frederick Knight. Their song, ‘Don’t It Make You Feel Good’ was recorded down in Malaco.

Other album highlights include the light disco of Keith Florence and the Associates’ ‘Future’ and Tyree Glenn Jr’s ‘SOS’- but all the cuts offer something catchy and quirky.

‘Can You Feel It? Modern Soul, Disco & Boogie 1976-86’ will be released on CD and in double vinyl. The first 400 vinyl copies will also have a 7″ single of Deep Velvet’s ‘Can You Feel It’ for which the series is named.