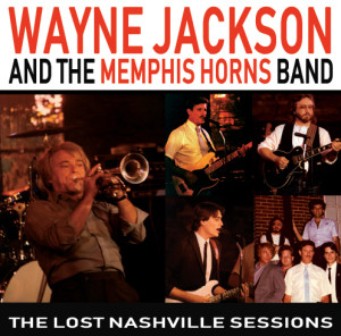 All proper soul fans know and revere trumpeter WAYNE JACKSON. One of the architects of the Stax sound, after that label’s heyday he formed the Memphis Horns – a tight horn section which freelanced on countless hits across all sorts of genres. Amongst the sessions they played on was Peter Gabriel’s ‘Sledgehammer’ and it was at that time (1984) that Jackson felt it would be a good idea to try something a little different… a Wayne Jackson vocal album.

Working with Nashville engineer, guitarist, keyboardist, and bassist Frank Green a new “Memphis Horns” band was put together which included old colleague Andrew Love. Ten tracks were recorded in Nashville with some of that city’s top sessioneers but the finished album was never released … till now.

In July 2017 Jackson’s wife Amy received an unexpected email from Frank Green, saying that the lost album had been found and with her co-operation (Wayne passed away in 2016; Andrew Love in 2012) the ‘Lost Nashville Sessions’ has just been released.

The ten tracker is obviously brass heavy but as Wayne wished it’s a vocal collection. The soundscape is varied with some of the cuts maybe a touch too rocky for soul sensibilities. Those soul sensibilities though will be satisfied by the southern soul flavoured ‘Choose Your Own Poison’, ‘Take These Chains’ and the lovely roller that is ‘Abandoned Heart’. Amongst other interesting tracks is ‘Sweet Medicine’ which features an ever changing lead vocal in the manner of Norman Whitfield era Temptations.

THE LOST NASHVILLE SESSIONS is out now