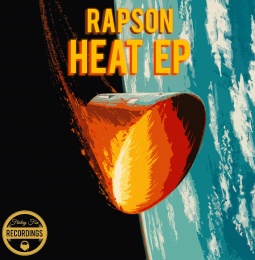 (MARC) RAPSON is a UK based producer, composer and keys player who’s worked across a variety of genres. He’s collaborated with people like Ben Westbeech–Brownswood and Kenny Thomas but more recently he’s entered the world of soulful house… remixing for Friday Fox recordings.

Now the label’s offered him a release out on his own under his working moniker, Rapson. So, August 1st sees the official release of a four track EP, ‘Heat’.

The title track which features a vocal from Nathan Thomas is an edgy mover (the kind of thing that Omar’s so good at). Elsewhere, ‘The Jazz’ is an electro (mainly) instrumental and ‘That’s Real’ adds jazzy tones to another bouncing’ keys-led instrumental.

The cherry on this particular cake though is a wonderful little tune called ‘Love Is Real’ which is more modern soul than soulful house. It boasts an understated but still soulful vocal from young Holly Petrie (access our archive for more on this promising Londoner) and it has everything that made those great old Drizabone tunes so damn appealing. Why, you even get a crazy sax break! The modern soul crew will miss this one at their peril!

RAPSON’S ‘Heat EP’ will be released on August 1st 2016 on Friday Fox Recordings.