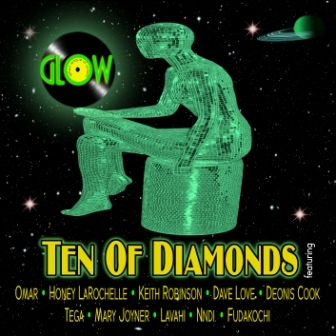 Browse the soul web sites and drop in to to some of the more up front soul stations and chances are you will come across/ mention/hear about a new album – ‘Ten Of Diamonds’ from GLOW. Astute research reveals that GLOW isn’t a band or artist; rather it’s an acronym for GIFTED LEAGUE OF WRITERS. The project is the brainchild of producer DAWN McGHEE who commissioned some of her favourite musicians to write some new music. Then she paired that music with particular lyricists and then recorded the music. Her template for this was the way Motown worked with their famed “Corporation”. Amongst the writers, lyricists and artists on the 12 tracker that is ‘Ten Of Diamonds’ are Bobby Sparks, Gino Lockhart, Ernie G, Omar, Cymphony Jaxon and Honey Larochelle.

The GLOW people describe their music as “an exquisite blending of Jazz, R&B, Hip-hop and Rock taking the listener into the depths of soul music. It is familiar. It is futuristic. It is unapologetically pure“. Yep, it is just that – cross genre, ultra contemporary and envelope pushing. To put it into, maybe, a more specific musical context, the sound is generally downbeat – in places it reminds me of neo-soul; elsewhere I’m hearing the influence of Teddy Riley and Blackstreet. Hear that neo-soul sound at its best on the semi-spoken, early Jill Scott sounding ‘Sister Xoxo (Prelude)’ or ‘Let’s Make Music’. While if you’re yearning for the great days of Blackstreet, try the opener ‘Best Of Me’ or ‘Smile Again’.

Elsewhere? Well, all kinds of everything. Omar is at the mic for ‘Give Myself To You’ (typically Omar) and in honesty I didn’t connect with the rocky, explosive closer ‘Birth’. I don’t think any soul fan would connect with its excesses. Still if you want to investigate, the album (excesses and all) is out now.