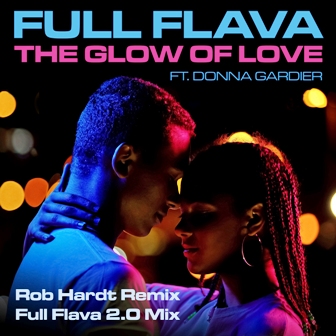 It seems that Change’s anthem ‘The Glow Of Love has been with us forever! Anoraks, though, will tell us that the tune first surfaced in 1979. It came via Bologna, Italy (where Jaques Petrus laid down the track) and New York (where someone called Luther Vandross recorded the vocals!)

Fast forward to 2007 (I think) and the UK‘s FULL FLAVA team (Birmingham’s Rob Derbyshire and Paul Solomon) offered us their very own take of this special song. Featuring a lovely vocal from Donna Gardier, it quickly became UK club floor filler!

In May, Full Flava were back in the swing when their oldie ‘Make It Right’ enjoyed a new lease of life via a Bluey Maunick remix and, striking while the old iron is hot, their classic ‘The Glow Of Love’ now gets the remix treatment too! Rob Derbyshire himself offers some new subtle shadings to the track while Cool Million’s Rob Hardt gets to put his spin on proceedings too. Hard to pick a favourite – all three (there’s a radio edit of Rob’s mix) hit the spot and it’s such a great tune anyway! You can investigate yourself via Dome Records…. out now!