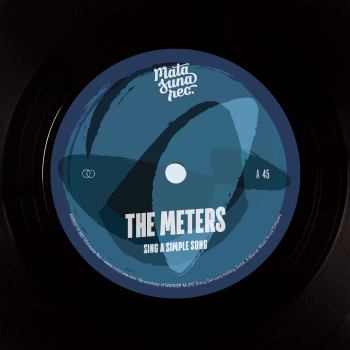 The disc’s putative A side is The Meters’ version of Sly and the Family Stone’s ‘Sing A Simple Song’. The sound is typical of the New Orleans maestros… sparse and loose with heavy drums, funky guitar, deep basslines and a lively organ, it offers a new perspective on the familiar tune. It was first released by the Meters in 1969 but has never been issued as a 45.

The disc’s flip features the The Watts 103rd Street Rhythm Band track, ‘Giggin’ Down 103rd’. The band first released  the  tune in 1968 as the B side to their  ‘Bottomless’ single. ‘Giggin’ Down 103rd’ is led by a tight horn section  and it’s a perfect complement to the sound of the Meters.

This double A sider will be released on April 30th – vinyl only.