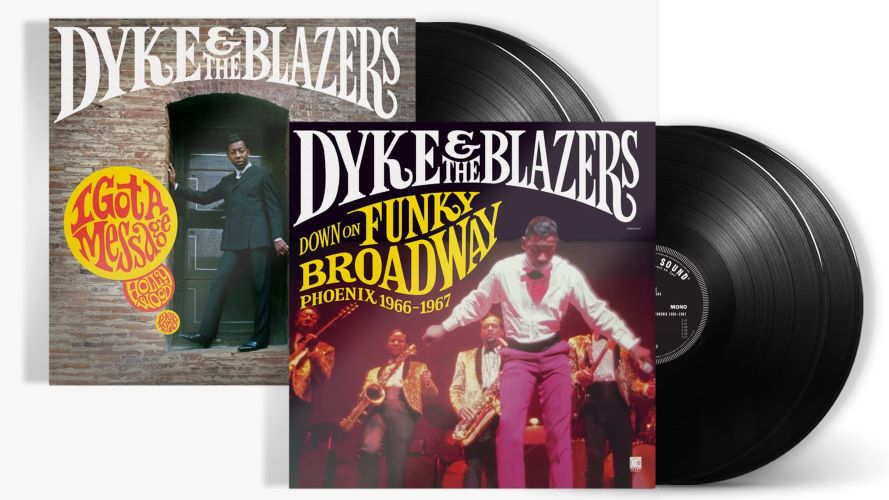 Not too many soul folk will recognize the name of Arlester Christian, but hard core funkateers will know of his alter-ego and his hard-hitting band…. DYKE AND THE BLAZERS!

Their first single was their rough, gruff, gritty take on the James Brown sound – ‘Funky Broadway’ and and when the song was picked up by Los Angeles deejay Art Laboe and reissued on his Original Sound label in 1967 the song became a national hit. (TRIVIA TIME 1! The “Broadway” in the song isn’t the Great White Way in NY, rather it’s a street in the band’s hometown, Buffalo. TRIVIA TIME 2! ‘Funky Broadway’ was the first charting song to use the word “funk” in its title!). Soul buffs will know that Wilson Pickett covered the song and took it to no.1 R&B. Anoraks will also tell you that a multitude of other artists would also cover the song, including Diana Ross with The Supremes and The Temptations, Jackie Wilson and Count Basie, and Steve Cropper. Clearly Dyke and the Blazers were on their way!

Original sound issued more and more singles featuring the same rustic funk flavours and  they released one album, named for that big hit. However, as if often the way, the original line up fractured very early on leaving Dyke “Blazer-less”. Consequently, most of his post debut hit songs featured session players  and when recording in Hollywood he used the core of Watts 103rd Street Rhythm Band. The “new” Dyke and the Blazers enjoyed several more hits – notably ‘So Sharp’ and ‘We Got More Soul’ but, tragically, as his career was building,  he was shot dead in Phoenix whilst preparing for a UK tour. He was just 27.

However, Dyke and the Blazers left a mighty  funk legacy and Craft Recordings have brought it all  together on two album collections…. ‘Down On Funky Broadway: Phoenix 1966-1967’ and ‘Got A Message: Hollywood 1968- 1970’. Across the two albums (out now and available via digital and vinyl) there are 42 tracks spanning the group’s impactful career. Everything you’d need is there… the hits, new stereo mixes, previously unreleased tracks (21 of ‘em) and radio spots. The diet is unrelenting hard funk. The titles say it all … ‘Funky Walk’, ‘Funky Bull’, ‘Extra Funk’ etc while there are numerous re-treads of the ‘Broadway’ theme. The only down moments are the bluesy meanders ‘Why Am I Treated So Funky Bad’ and ‘Call My Name’. There’s also a cover of the Isley’s ‘It’ Your Thing’ which, if you can believe it, out-funks the original! Indeed, these albums show that  Dyke/ Arlester could give James Brown a run for his money! Who knows what he might have yielded had he lived longer? Indeed, long after his death his music was sampled ad nauseam by the hip hop brigade.

Esteemed crate digger/writer Alex Palao has put the sets together and his sleeve notes  tell you all you need to know. He opines: “The unique noise that Dyke and the players developed in the relatively isolated—musically speaking—desert environs of Phoenix, Arizona, was unaffected and real. It projected in sound the same sort of statement that their raw-voiced frontman, in his evocative description of the street and its importance to the black community, was making. Dyke’s metaphor of Broadway, and its ‘dirty, filthy’ ennui, was entirely appropriate—this was dirty, filthy music, and soulful to its core.”

Tags: Dyke and the Blazers