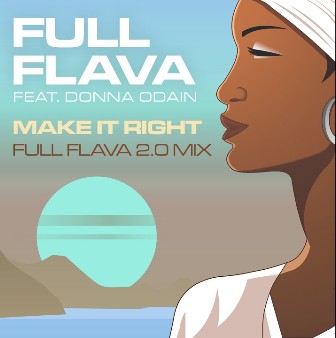 The UK FULL FLAVA team (Birmingham’s Rob Derbyshire and Paul Solomon) have been producing top notch modern soul for almost two decades. Their music has an almost timeless quality – a fact borne out by the fact that songs from their back catalogue are consistently being streamed and downloaded worldwide.

One of their most popular downloads is their ‘Make It Right’ which features the vocals of Donna Odain. Originally recorded for Dome Records, the team have just commissioned a remix of the song from Incognito’s Bluey Maunick. Assisted by Richard Bull, Bluey has put a soulful, summery spin on the tune while it’s putative B side is a second new mix of the track from Rob Derbyshire. Both are fine examples of the art of modern soul and come recommended. Out today – May 1st – on Dome Records.