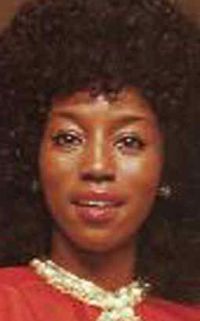 An official announcement was made yesterday (1 July) that FAYETTE PINKNEY – an original member of the THREE DEGREES had died aged 61. Ms. PINKNEY, who had been working as a patient counsellor at the Medical College Of Pennsylvania, died of acute respiratory failure at the Abington Health Lansdale Hospital near Philadelphia on Saturday 27 June. FAYETTE, SHIRLEY PORTER and LINDA TURNER formed the THREE DEGREES at High School and over the years she remained the group’s only original ever-present. She was there during the group’s most prolific period when they enjoyed a strong run of chart hits – even winning the dubious accolade of becoming PRINCE CHARLES’ favourite group!
She left the group in 1976 to pursue an academic career (though she did record one solo album) – eventually winning a Masters Degree and going on to work in medical administration and counselling. She continued to sing with the Intermezzo Choir Ministry and she’s survived by her brother NATHANIEL.