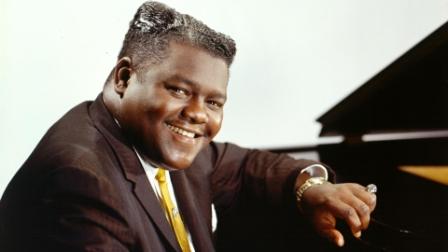 Pioneering R&B and R&R star FATS DOMINO has died. He was aged 89 and Mark Bone, chief investigator with the Jefferson County, Louisiana, coroner’s office, said Domino died of natural causes at 3.30am on Tuesday 24th October.

Born Antoine Domino Jr on 26 February 1928 in New Orleans, “Fats” was one of nine children. His father was an accomplished violin player but Fats taught himself piano styles perfecting a mastery of ragtime, blues and boogie-woogie. After school he played local juke joints before being signed to Imperial Records. His first recording was the semi-autobiographical ‘The Fat Man’. His first crossover hit was ‘Ain’t That A Shame’ but ,as was the norm in the 50s and 60s, a sanitised version by Pat Boone enjoyed greater chart success.

Domino’s other hits include ‘Be My Guest’, ‘I’m Ready’, ‘Walkin’ To New Orleans’ (a cover of a Bobby Charles R&B hit), ‘Jambalaya’ (his R&B take on the Hank Williams’ country song) and, of course, ‘Blueberry Hill’.

Fats Domino had a unique, identifiable sound and most pop music histories will explain his huge influence. In the early 60s most beat groups had at least one Domino song in their repertoire while Elvis Presley once opined that “Fats Domino was a huge influence on me when I started out”. Its common knowledge too that Paul McCartney wrote ‘Lady Madonna’ in the style of Domino as a tribute to him. (Fats is pictured below with the Beatles).

Fats’ profile waned in the late 60s as musical tastes changed; he preferred to stay true to his New Orleans musical roots but continued to find plenty of work on the oldies circuit and at festivals. In the 1980s, Domino decided he would no longer leave New Orleans. He had a comfortable income from royalties and he claimed that he could not get any food that he liked anywhere else! Even His induction into the Rock and Roll Hall of Fame and an invitation to perform at the White House failed to persuade him to make an exception to this policy. He was happy in his own house driving round town in his famous pink Cadillac!

Fats, like everyone in New Orleans, was a victim of 2005’s Hurricane Katrina. His house was badly damaged and he lost three pianos and dozens of gold and platinum records, along with other memorabilia. Rumours abounded that he had died in the disaster but “The Fat Man” was a born survivor. By 2007 he was performing again, though his schedule slowed down after the death in 2008 of his wife, Rosemary; they had been married for fifty years.