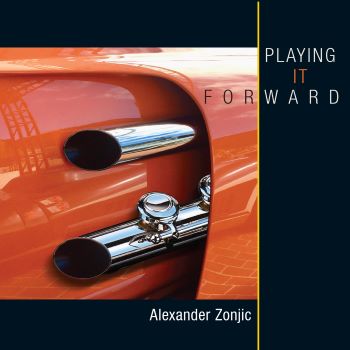 ALEXANDER ZONJIC is a classically trained Canadian flautist but for something like 30 years he’s been a key part of Detroit’s vibrant jazz and soul scene. He records from time to time but he’s usually in such demand for sessions and festivals that finding time for his solo work is hard… till, of course, the pandemic! The enforced Covid  hiatus has allowed Zonjic to work on an album of his own and the 11 tracker that is ‘Playing It Forward’ has just won release on his own Hi-Falutin’ label.

Such is the flutist’s standing in the jazz community that he can call on some big genre names to help him flesh out his musical ideas. So on ‘Playing It Forward’ there’s input from people like Paul Jackson Jr., the late Chuck Loeb, James Lloyd and Jeff Lorber. And it’s long-time collaborator, Lorber who’s in the producer’s chair for all but one of the LP’s tracks; indeed the meister keyboardist also penned /co-penned a goodly clutch of the tunes – including the Chuck Loeb collaboration ‘Musiac’ which dates back to early 2017 and it was one of the sadly missed guitarist’s last recordings .

Amongst the other Lorber tunes are the sprightly opener, ‘Jazz Café’ and the optimistic ‘Hipster’. Those and the other originals mix easily with some interesting covers like Adele’s ‘Rolling In The Deep’ (featuring the Selected of God Gospel Choir), Bob James’ ‘Night Crawler’ and Jethro Tull’s ‘Living In The Past’. Zonjic is a big fan of Tull’s leader Ian Anderson and the cover is his tribute to one of his flute heroes!

Track grabbing the attention at the moment though is ‘Motor City Sway’ … our man’s homage to his adopted city. This one is written by Pieces Of A Dream’s James Lloyd who also plays keys on the cut alongside new smooth jazz “wonder boy” Justin Lee Schultz.