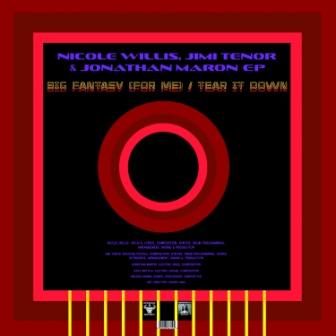 Brooklyn’s NICOLE WILLIS won an army of fans with her ‘Tortured Soul’ album back in 2013. That was followed by the equally well received ‘Happiness In Every Style’ from which ‘One In A Million’ became a modern soul favourite. Released on Timmion Records, Nicole was backed on both occasions by the so, so solid Soul Investigators who provided proper old school backing.

For her latest outing, however, Ms W seems to have left the band behind. She’s about to release a 6 track EP on which she’s backed by Jimi Tenor and Jonathon Maron.

Tenor has spent the last two decades creating an eclectic music that combines electronic and afro-jazz styles. He has his own label, Sahko Recordings, and he’s collaborated with the likes of Tony Allen and Kabu Kabu. Maron is known for his unique bass playing. He was the bassist on Maxwell’s classic ‘Ascension (Don’t Ever Wonder)’. His list of collaborators includes Meshell Ndegeocello, Tupac Shakur and Norah Jones and soul anoraks will know that the pair were in the Repercussions, who worked with dear old Curtis Mayfield.

On the new 6 track EP, which is released on Nicole’s own Persephone Records, there are essentially two songs…. ‘Big Fantasy (For Me)’ and ‘Tear It Down’ but they come in full edits, radio edits and instrumentals… so, 6 tracks. Soundwise, things are very different to Ms Willis’ last two long players. Her people are calling the sound “disco funk”… ad you can see where they’re coming from. There are plenty of big booming beats and Nicole’s voice is tough and uncompromising. File under “interesting”

NICOLE WILLIS, JIMI TENOR & JONATHAN MARON – BIG FANTASY (FOR ME) / TEAR IT DOWN released on 12″ on Persephone Records on 17th March.