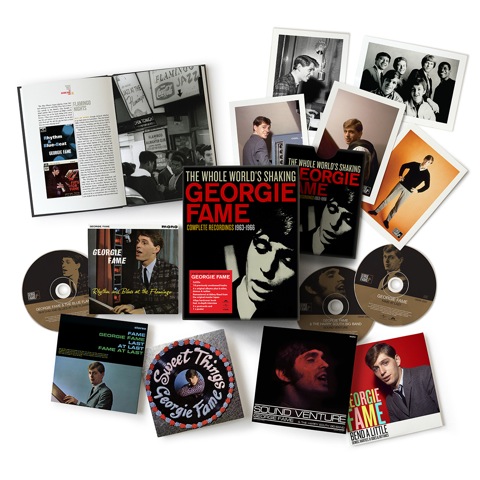 GEORGIE FAME is a national treasurer! I’m sure though that the man born Clive Powell in Leigh, Lancs wouldn’t thank you for the epithet! Despite a long and garlanded career he remains what he always been – a self-deprecating lover of and apologist for quality soul and jazz, still happy to continue to travel the world playing to appreciative audiences.

Georgie’s been at the top of his game for over fifty years, and to celebrate, Universal Music is about to release a remarkable 5 CD box set which focuses on his early years…. 1963-1966. The collection, entitled THE WHOLE WORLD’S SHAKING, offers Georgie’s first four albums – including his breakthrough live set with his Blue Flames, ‘Rhythm And Blues at The Flamingo’ and the acclaimed and in-demand ‘Sweet Thing’, named for Georgie’s exceptional version of the Spinner’s Motown song. The fifth CD in the box is a collection of real rarities and out takes and includes a massive 18 previously unreleased songs.

Throughout, soul collectors will be delighted to hear Georgie’s versions of classics like ‘Monkey Time’, ‘Shop Around’, ‘Money’, ‘The Point Of No Return’ and ‘My Girl ‘while jazz buffs will welcome the availability of the album Georgie cut with the Harry South Big Band, ‘Sound Venture’. Highlights abound throughout the 106 tracks but the one Fame fanatics always say distils the essence of his art is his cover of Willie Nelson’s ‘Funny How Time Slips Away’ channelled by Georgei via Joe Hinton’s version.

The collection comes In a vinyl version too and Georgie is touring through the Autumn in support of the release… your local press will fill you in if he’s coming to a venue near you.