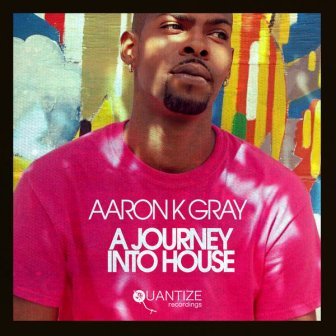 AARON K GRAY is a New York based Soul and Gospel house singer /songwriter. He began his musical career at the age of 7 years old as the lead singer in his local church choir. In 2001 he released an R&B album entitled ‘Body Rain’ which won plenty of critical acclaim. Since then he’s focused on Gospel House and enjoyed success with tunes like ‘Funky Praise’ and ‘When We All Pull Together’ with Jeff Redd, Kenny Bobien, and CeCe Rogers.

Mr Gray has now released his latest album in the genre – ‘A Journey into House’. It’s a massive 17 tracker and includes collaborations with people like Mark Francis, Graham Knox Frazier, DJ Gomi, Marc Tasio and Junior White – all respected figures in the Gospel/House arena. The tunes on the album vary from booming beaters to more subtle affairs. The set’s stuffed with clever little hooks, jazzy keys, tight beats and inventive bass lines but it’s Aaron’s convinced and convincing vocals that carry the day and when he’s backed by a big choir (as on ‘Jesus’) you may well recall the mighty Sounds of Blackness in full flight.

The album is out now on Quantize Recordings