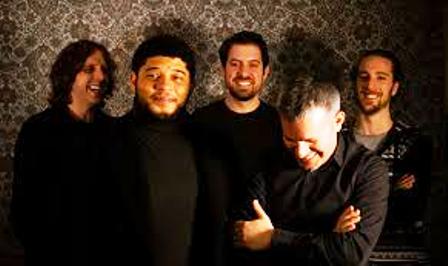 ‘The Great Extreme’ is the intriguing title of a new album from a new (ish) Chicago band BARRY AND THE FOUNTAINS. The band is led by Louisiana-born but Chicago-based Barry J. Fontenot whose first foray into soul (he was trained as a classical tenor) was with Barry Fontenot and the Hurricanes, but after a move to the Windy City he hooked up with the Fountains and the quintet were soon making a name for themselves on the city’s bar and club scene. Now the band are ready to unleash their debut album… the concise 6 tracker that is ‘The Great Extreme’ on which the music is as intriguing as the title, as we opined up top!

What makes this album stand out (apart from its brevity – a good thing, we think) is the sonic marriage of two soul styles. Born down south, Mr F is steeped in the music traditions of his heritage. So, in his sound, style and delivery, hear shades of people like Sam Cooke and Otis Redding, but working with the Fountains there’s an urban, more uptown edge to proceedings … more specifically a Chicago flavour. Produced by keyboardist Amir Khay Nir, you can hear that mix at its best on the cool ‘Come On Down’ and the brassier ‘Second Line’. We’re told that the album’s focus cut is ‘Desiree’. This lengthy cut is more acoustic and its creation was something of an epiphany for Barry, written in 2014 when he was “drunk and bleeding” down in Mexico.

Earlier in the year we highlighted an album by Durand Jones and the Indications and if you liked that kind of retro soul with a modern twist, you may well want to investigate Barry And The Fountains.