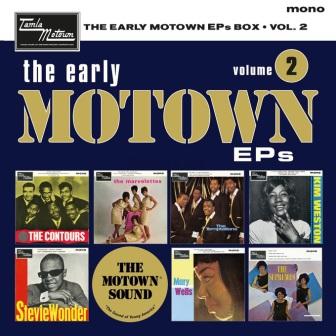 Back in the day, savvy record companies used to, issue EPs. “Extended Play” vinyl 7″ records that came in a picture sleeve and offered (typically) four tracks. Midway between an album and a single, they gave the record buying public the opportunity to delve into an artist’s repertoire without having to shell out for a full long player.

In the UK EMI led the way in the EP stakes and naturally, through their licensing deal with Motown, many of their EPs featured Motown material. In March 1965, they released five Tamla Motown EPs from The Contours, The Marvelettes, The Temptations, Kim Weston and Stevie Wonder. Two months later, came another batch that included a Mary Wells and a Supremes set. All those EPs are now hugely collectable with the Kim Weston one in particular fetching big bucks…. if you can find one!

Well, if you don’t mind replicas (it’s what’s in the grooves that counts after all), then UMC/Island are about to reissue all seven in a lovely box set. Each vinyl EP offers the four original tracks and comes in a beautifully reproduced recreation of the TME series in faithful ‘Garrod and Lofthouse’ style covers.

We’ll bring you a full review just as soon as we have our copy!