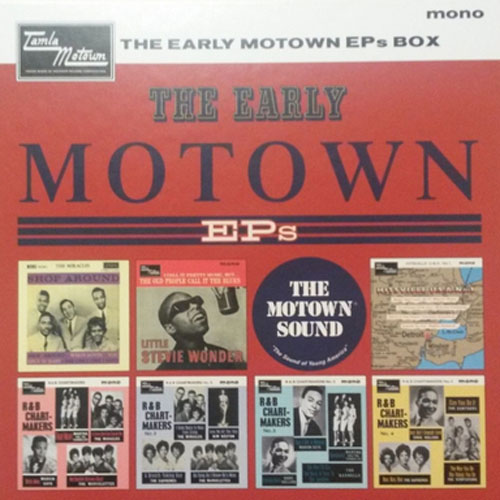 In the olden days… when telly was in black and white and we used real money – people generally bought their music as a 7″ vinyl single. For just under seven bob (about 35 p in this new fangled stuff) you got two great songs. Rich kids (and grownups) would sometimes buy LPs (long players). They sold at about 29/11p (just under £1.50) and would feature 12 or 14 songs though I can remember my first Motown complications had 16 tracks.

In between there was a little thing called an EP (extended play). Coming in a picture sleeve (like a mini LP), they sold for about 9 shillings and, in a 7″ vinyl format, they would have four songs on ’em (though I had a Major Lance one with 6 tracks!)

EPs were, of course, a marketing gambit and when it came to record marketing EMI were pretty good. In the sixties they handled the Motown catalogue and to help boost the label’s image and generate sales, they issued a number of Motown EPs…. and any original versions still around are extremely collectable.

Now, just in time to make a nice Christmas pressie, Universal have reissued the first 7 Motown EPs. The vinyl collection comes in a limited edition box set and is sure to become just as collectable any originals out there.

Five of the EPs were/are mini compilations branded as either ‘R&B Chart Makers’ or ‘Hitsville USA’ and they offered an eclectic range of Motown recordings. Included were reasonably well known stuff like Martha and the Vandellas’ ‘Heatwave’ alongside oddities like the Darnells’ ‘To Hurt To Cry, Too Much In Love To Say Goodbye’. (The Darnells, Motown buffs will tell you, were essentially Marvelette, Gladys Horton supported by the Andantes). The two single artist EPs highlight the early work of the Miracles and Stevie Wonder.