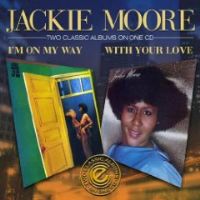 One of the UK’s leading independent soul labels, EXPANSION, has a varied batch of new releases out this autumn. Reissued on CD for the first time are the late-’70s albums ‘I’m On My Way,’ and ‘With Your Love’ by Southern soul siren, JACKIE MOORE. Both LPs – which are now available on a single CD – were originally issued by Columbia and produced in Philadelphia by Bobby Eli, who gave Moore a slick, mirror ball makeover. Included is Moore’s anthemic disco version of the O’Jays’ ‘This Time Baby.’
Also reissued for the first time are a couple of long players by the Windy City-based tunesmiths-turned-performers, (Zane) GREY & (Len Ron) HANKS. The duo’s RCA albums ‘Prime Time’ (1980) and ‘You Fooled Me’ (1979) can be found on a new Expansion twofer that features the hits ‘Dancin’ and ‘Now I’ Fine.’
Talking of duos, contemporary soul twosome KLOUD 9 (aka twin brothers Kendall and Kelvis Duffie) have a retrospective out called ‘Everything Is Good 2Nite.’ The 16-song collection features their biggest and most popular tunes – like ‘Can’t Stop Thinking About You’ – alongside some previously unissued cuts and remixes.
Kloud 9 are also featured on Expansion’s new modern soul compendium, ‘Soul Togetherness 2009.’ A beguiling mixture of new and vintage cuts, the 15-song set includes noteworthy songs by KYLIE AULDIST, CHAKA KHAN – whose non-album flipside from ’81, ‘Lover’s Touch,’ gets its first run out on CD – THE IMPRESSIONS, TYRONE LEE, JOVONNIE, PAPRIKA SOUL, VICTOR HAYNES, TAVARES and ROOT SOUL.
More stellar names from the soul world are present on a new 2-CD compilation, ‘The Soul Of Smooth Jazz.’ The set includes killer tunes from the likes of LONNIE HILL, GEORGE DUKE, JAMES DAY, LEDISI, FRANK McCOMB, LESETTE WILSON, ADRIANA EVANS, ANGELA JOHNSON, BOB BALDWIN, MIKELYN RODERICK and RAHSAAN PATTERSON. Tasty!

Go to www.expansionrecords.com for more info.
Look out for reviews soon at www.soulandjazzandfunk.com